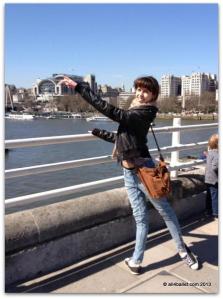 A week has passed since I travelled by train to Waterloo and walked across that famous bridge on my way to see my favourite ballet. It was a perfect spring day and London was at her very best – even the public transport system delivered us to the Theatre [and home again] without a hitch.

The National Ballet of Canada reappeared in London after a 26 year absence and was warmly  welcomed at the Sadler’s Wells. The five day tour showcased their new production of Romeo and Juliet which was commissioned by internationally celebrated choreographer Alexei Ratmansky as part of the company’s 60th anniversary celebration in 2011. With the combination of the seminal Prokofiev score, Ratmansky’s innovative choreography and the dancer’s tremendous talent, The National Ballet of Canada has created an interpretation that both honours and re-invigorates a well-known and much loved story.

The matinée performance I attended on Saturday 20th April featured First Soloists McGee Maddox and Elena Lobsanova as Romeo and Juliet. Lobsanova’s elegant lines and joyous interpretation made her a delightful Juliet and Maddox gave a solid performance as Romeo, displaying his strength and musicality. Together they portrayed the youth and love of the iconic couple and executed effortless partnering.

traditional Veronese scenes. It took some time to adapt to the more contemporary movements danced by the corps in the first moments of the ballet. However, by Act II I was captivated by the choreography which offered something different to the Cranko/MacMillan versions. The structure of the ballet plot, based on Shakespeare’s story, remained intact and was easy to follow.

The audience were caught up in the thrilling music played The Royal Ballet Sinfonia conducted by David Briskin. A collective sigh of approval rippled through the auditorium with the first notes of the famous dramatic Capulet and Montague ball scene music. The comic role of Mercutio was danced and acted brilliantly by Jonathan Renna. He added an extra quirkiness to his character that made us laugh aloud. A stark contrast to the dramatic ending, when the passion portrayed by Lobsanova and Maddox combined with the dying moments of  Prokofiev’s score had an overwhelming emotional impact on the audience.

I love this ballet and have developed a broad understanding of it, having analysed it musically, choreographically and literally for my GCSEs. My greatest dream is to one day perform the role of Juliet.