On Sunday 3 February I took part in the fourth masterclass of the ‘Focus on Style’ series that explores the European and Russian schools which influenced De Valois. Earlier in the day guests had attended a lecture by Altynai Asylmuratova, Artistic Director of the Vaganova Ballet Academy of St Petersburg, Russia.

The demonstration masterclass was taken by Irina Sitmikova, ex-soloist from Moscow and currently senior teacher of the Classical Dance Department at the Vaganova Ballet Academy. Our White Lodge pianist, Olga Mazour, played beautifully for the class and Miss Sitmikova’s comments were translated by a member of our Upper School staff. The audience was animated – laughing at the teacher’s jokes and applauding the students efforts. 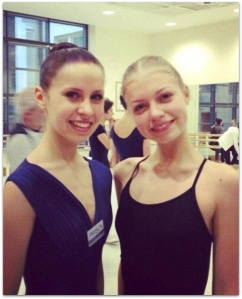 The class focused on speed, strength, extension and turns – there were very few jumps. Miss Sitmikova explained exercises at the barre, but in the centre we had to learn from observing two female students who had travelled from St. Petersburg with their teacher. Towards the end of class there were some very challenging ‘tricks’ (jumps and turns) which the two Russian girls performed with excellence. They were very motivating!

After the masterclass I stopped just long enough to snap this photo with Svetlana from St Petersburg before heading back to spend some mother/daughter time at a Spa nearby. We returned home for a late supper feeling sleepy and relaxed. I have celebrated my 16th birthday in luxurious style.